Digest of the best investigative journalism

There is such concept as Downshifting (English downshifting, switching of the car to lower transfer and also delay or weakening of any process) - the term designating vital philosophy "lives for the sake of itself", "refusal of others purposes". Every year, the people who are cardinally changing the life and moving away from "wordly vanity" become more and more.

The hermit Vick from the village of Volkovo 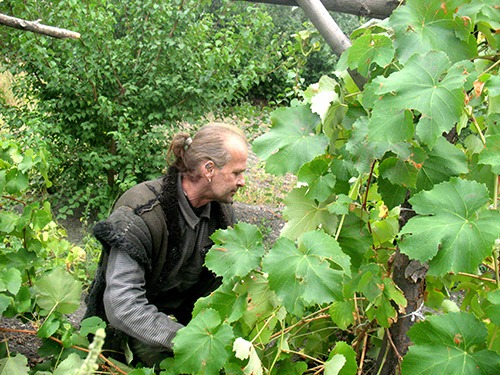 It is not believed that similar takes place to be in the 21st century. Happens, certain people are eager for a privacy, but do not refuse at the same time to themselves those benefits which the modern civilization can provide them. But completely to renounce everything, and to change human society for society of wild animals?! Today very few people are capable of it. The legend of the person by the name of Volkov walks across the Volga region for a long time. Say, for many years there lives this person in the forest among wild beasts, and any fruits of progress, even such elementary as electricity and gas, are not necessary to it. Is able to talk to animals, forges the huge swords very similar to medieval, builds the huge ship by which plans to escape of logs, like Noy on judgment day... In a word, person extraordinary in every respect. I heard about him much, but, as they say, a picture is worth a thousand words... 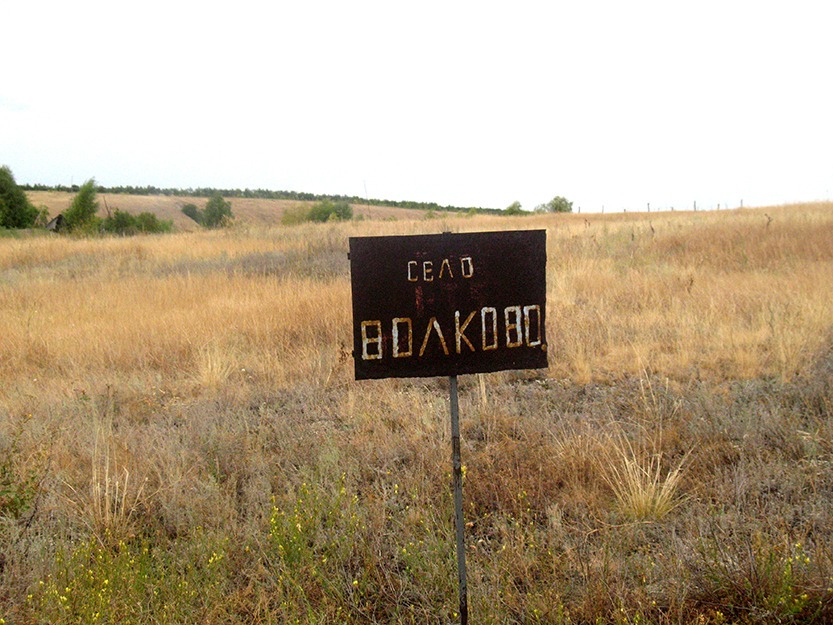 The village of Volkovo is in several kilometers from the village of Rogatkino of Krasnoarmeisky district of the Saratov region. In the village - one house, and it is called so because in this house more than 20 years there lives a hermit by the name of Volkov. Once at this small village other name - Klubkovo was perfect, it was inhabited by people, but nowadays here for a long time there are neither houses nor people, except the one and only person - the hermit Volkov. When approached with the photographer San Sanych his possession, frankly speaking, doubted that he in general will agree with us to talk. To find a reason for acquaintance, just in case took with themselves a kitten, hoping to present it as a gift as heard that the hermit holds houses any living creatures.

Braked "Village of Volkovo" at the plate as we were told, written by Volkov. Meters in twenty other plate - "Private property". Very not bad for the savage! But here dogs came tearing along and began to bark, letting know that we already intruded on this notorious "private property". After dogs the owner unexpectedly appeared. And the first unfriendly phrase: "What it is necessary to you here?" - "We want to present to you a little kitty...". "So you pass in a gate, - the hermit was almost at once softened, - I have three cats, and the kitty was not yet". We get acquainted. His name is Victor. - "It is possible just Vick" by sight - years 55. Hair are braided to the spit, in earring ears, all fingers of hands are decorated with self-made copper rings with the sharp teeth reminding claws of a large predator. It seems battle against it! Unusual, but kind face...

After the first minutes of communication the caution passes, and the owner invites to see his dwelling. On an entrance we shudder: by the first we are met by a skull of a wolf. "Attacked me, it was necessary to kill..." But it only the beginning: having low bent down, we get through to summer apartments of Volkov and... as if we are transferred on the time machine to the 15th century. An earth floor, low ceilings, cracks in walls, a small table, nearby the self-made furnace on which it is possible to sleep also in cold weather. Everything is made by the owner of logs, rods and clay. In a floor the deepening in which the flowing stream so, behind water it is not necessary to go murmurs is dug through. Thanks to the furnace, water in a stream does not freeze even in hard frosts. It is necessary to heat the furnace firewood just more often. 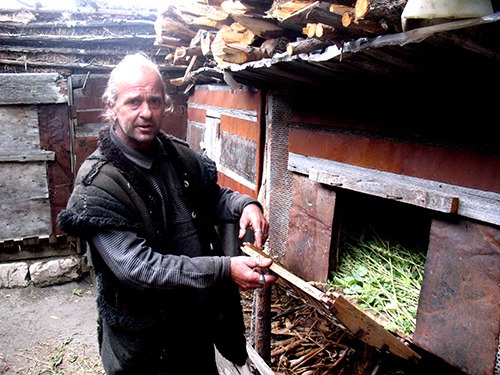 Behind the next bed curtains there is a smithy. How many it was necessary to put efforts manually to drag not one dozen trunks of trees from the wood and to build from them this medieval building! "I do not complain of health, - Victor says, - at the very least, but I lift 200 kilograms of weight so far". The proof to they are huge boulders which Volkov brought from far away "for landscaping". We with San  Sanychem did not even risk to try to lift at least one of the lying blocks rather tried later, but came to grief: in my opinion, such weight can do to only four healthy men.

One more surprising detail struck us on an entrance to a farmstead at a wattle fence against the background of the steppe alone the box of the modern payphone, the only symbol of a civilization reddened. What for a joke? - We asked Vick. It appeared – not a joke: from the payphone it is possible to call if there is a card. The hermit told that once in this area there was a bloody infighting between local drug barons, some were not saved due to the lack of telephone communication. Since then, payphones stand in each village including in Volkovo with its lonely inhabitant. However, Vick yet never used it: to whom to call?

As become the hermit

To asceticism life of a pomotal of Victor Volkov fairly. And, being a young fellow in army, on a rocket point received a solid dose of radiation. And in Volgograd at one of the plants worked as the smith, and with the Don Cossacks lived enough, studied the mass of professions, forged medieval swords and sabers under the order. But the moment when it was necessary to endure treachery of the beloved came in life once. Left at once, up hill and down dale, and then on the earth of ancestors pulled.

Volkov returned to the patrimonial village, and there - it is empty: neither people, nor houses, even ruins of buildings thicket weeds. At the beginning it was necessary to work and live in the neighboring village of Rogatkino, and then gradually built up the housing and left far away people. "Here all my ancestors lived through many centuries, so why don't I live here?" - Victor argues.

It is difficult to imagine now as it is possible to live without electricity and gas, but at this surprising person on it one answer: "Yes everything is normal..." The power line in former years passed here, but then someone stole wires for delivery in collection point for non-ferrous metals. Volkov is not upset - he cooks food on fire. With animals at it the special relations. Paradoxical fact: living near the wood, the hermit, unlike Robinson Crusoe, does not get to himself livelihood hunting. "The living creatures need to be protected, it is a part of the nature".

Roes and elks often visit Victor's possession, foxes run, and not really are afraid of him. There is a lot of wild animals, even red wolves (such attacked Volkov), the special breed which turned out once as Victor speaks, from accidental crossing of foxes with wolves and growing in this area not one century meet quite often. There are no living creatures in these parts really, much, perhaps, only bears, but can be, it and to the best. I in political sense: the hermit Vick easily would cope with an ordinary bear. The main food of Victor are rabbits which he grows up on the farmstead. On the earth the hermit parts various vegetable cultures, fruit and even grapes...

Flying ark of the dreamer Volkov

The main pride of Victor Volkov - the huge wooden ship constructed by it directly in the yard of the economy. Or rather, yet not the ship but only a skeleton, but Victor promises to complete it in the next years. It would seem, was much more logical to build the ship near water then with little effort to lower it in water from building berths. The next high water - in the village Gold which is located on the bank of Volga that in 12 kilometers from Volkov's farmstead. However it it does not worry as the ship of the hermit will be special - flying. "It is my children's dream - to construct the hands the ship and to depart by it to unprecedented distances", - whether for fun, whether Victor seriously speaks. 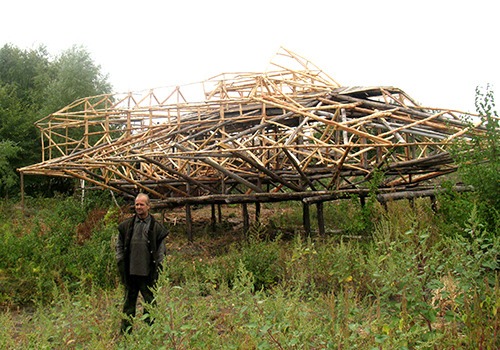 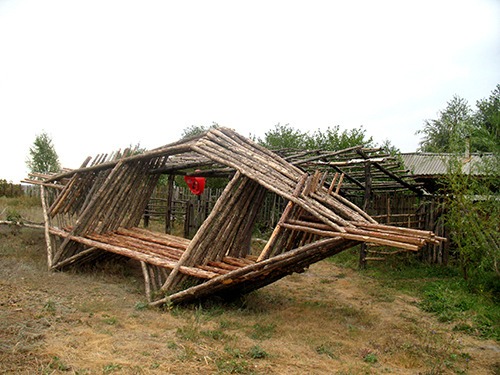 Volkov is not torn absolutely off from the world, he periodically learns news, listening to the self-made radio receiver (working from batteries) which he designed from the ancient Soviet Romantic tape recorder. Therefore it is aware that the president at us Vladimir Putin, and the prime minister - Dmitry Medvedev...

Sometimes to Volkov there come quite unexpected guests. There was somehow, according to him, a major general of FSB from Moscow with the whole suite. Went on a farmstead, photographed, asked... For what, he did not understand. Victor Volkov does not believe in God and does not go to elections. Life after death considers fiction: "Human consciousness as the radio receiver - you will switch off the device, and the sound in it dies away two-three more minutes. And the consciousness stream after death - is slowly reduced, and then a gloom and darkness...".

Does not trust in Darwin theory as it is sure that the conceiving person is obliged by the origin to complication of the cellular and molecular processes happening on Earth during tens of billions of years. With a civic stand and elections it is simpler: "Once, in that life, I went to vote, but then understood full senselessness of this process. I live the hermit in the world, and me does not interest at all who is chosen by people. Perhaps, they choose not those who are worthy as it is difficult to distinguish very often bad people from good". On a question of whether weighs his long-term loneliness, answered shortly: "Normally... Alone you think of point of human life more"... Such here philosopher – the hermit.

Looking at this unusual person, you understand that people, not subject to its defects remained in dirt of our civilization. They are far from our attitudes and values. I represent that sometime Victor Volkov will execute the children's dream: will construct at last the flying ship and will fly up up, far away from treacheries, idolatry, greed and envy, from all other nasty defects of our rotting civilization. It is clean and light soul, and such remained a little presently.

P.S. Later I regretted that I brought to the hermit in a month. film crew of Channel One. Did not pass also two weeks after a plot exit about the hermit as his farmstead together with the house was burned by unknown while Vick was in the forest. Envious persons of his independent life appeared much. They say, thought, it at home, and wanted to burn alive: the entrance door of the hut was propped up by a log.

I arrived to it in a year, before New year and with gifts – a modern radio-gramophone and the block of cigarettes. During this time Victor Volkov built up the long dugout which is well warmed by tarpaulin. The smithy, near it – the big clay furnace and an underground bath is intact. Despite a twenty-degree frost in a dugout was very hot, it was only impossible to be unbent – you will hurt the head. With it his cats and dogs also live. The hermit did not lose optimism after all incident, does not feel feeling of embitternment to the enemies and unaccomplished murderers, but also is not going to turn the other cheek – let will try to be again.

More we did not meet the surprising hermit Volkov …