The project in Kondrovo became the first of 57 import-substituting productions created in Russia with assistance of Fund of development of the industry. Its portal reports that "now only 10 percent of diapers are manufactured in Russia, other requirement is satisfied through import. Meanwhile annual requirement of the Russian market already exceeded 700 million pieces. It is a big problem. Creation in the center of Russia of the Gigiyena-Service Honey enterprise became the adequate answer to it also. In the near future, Alexander Bushin promised, Gigiyena-Service Med will force out the products import goods for 50-55 percent. Here also process of inevitable import substitution will begin". The FRP portal confirms information on Bushin's plans to win 50% of the market of diapers for adults. It should be noted that at that time the share of the market of LLC Gigiyena Service was estimated approximately at 2%. It was supposed that the retail price of one packing of the MEED diapers will be 400-500 rubles, that is for 15-20% of low price of import analogs.

I did not manage to find any document which would contain a reasonable explanation of how Bushin is going to implement the Napoleonic plans for several years. There are no ingenious marketing specialists, there are no unique patents and nanotechnologies, there is only an import-substituting and patriotic discourse. However Bushin managed to convince FRP and other creditors of the project: in 2015 FRP granted a loan of 500 million rubles under 5% for a period of 5 years for implementation of the project with a total cost of 1.3 billion rubles. At the beginning of 2016 started new production. By 2019 LLC Gigiyena service she intended to increase the output, having started domestic lines. Except diapers for adults the modernized line had to release and children's diapers. One year it was planned to pass to 100% ensuring production with domestic raw materials later. The Novoye Vremya newspaper quotes Alexander Bushin: "We have a potential which allows to solve such problems. Of course, we will ask for the help. Independently not to pull such project. Plans at us big: let's start one more line import, and following – made hands of our handymen. Nobody in the history of the USSR, Russia formed such technologies. We will make! Behind my back the rallied labor collective. It force, performer of all plans. I admire it and I tell great thanks!". Moreover, Bushin not only was ready to win 50% of the market, but planned to open production of own equipment, the high-quality lines of release of products of adult and children's hygiene.

Grotesque plans of FRP and Bushin against the background of the real situation look. LLC Gigiyena Service Honey is entered in the register of unfair suppliers and is deprived of access to state procurements, and at Bushin there took place searches within criminal cases about non-payment of taxes and non-payment of salaries (Articles 199 and 145 of the Criminal Code of the Russian Federation). According to the statement of Gazprombank the criminal case about abuses of authority during the receiving and the order is brought by the credit of more than half a billion rubles (Article 201 of the Criminal Code of the Russian Federation). It became clear that Bushin increased creditor loading without coordination with the main creditor, stopped payments and by that caused anger of bankers. Bushin saved up more than 58 million debts on salaries and did not pay off with the German supplier of the equipment "Bikoma". Germans initiated bankruptcy of Gigiyena Service which introduction was postponed until Bushin's employees finished excessively did not take a public hard line on payment of debts. The open address to Alexander Bushin of 37 employees of Gigiyena-Service stirred up a situation. There was the state campaign for collecting salary debts under which Bushin automatically got. Business joined prosecutor's office and police officers who under pressure of criminal cases forced Bushin to pay people. Against it played image of the richest person of the Kaluga region which Bushin several times received by results of the publication of declarations. 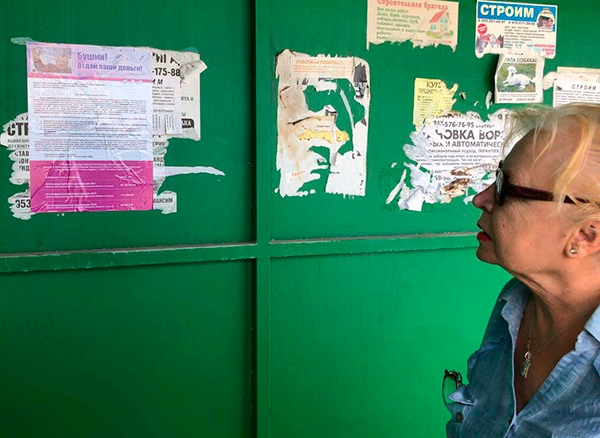 Against the background of salary scandal «Edinaya Rossia» suspended party membership of Bushin. The debt enormous by local standards to workers struck reputation of the governor, that is visible according to the rating of St. Petersburg Policy Fund. Almost at once the court met requirements of creditors about introduction of the procedure of bankruptcy of the companies of Bushin (Case No A23-7110/2017 and A23-7629/2017) and it personally as guarantor on the credits (Business of NoА23-1125/2019). At the same time the scheme which was used by Bushin for adjournment of introduction of the procedure of bankruptcy – formed the basis of criminal case (Part 1. Article 199.1 of the Criminal Code of the Russian Federation). Having debts on taxes and salaries, Bushin before the regular court session made small payment on a debt to Bikoma GmbH Shpetsialmashinen. Three dozen accounts of Bushin were arrested, but he found an opportunity to bypass restrictions what officially reported to the judge about. Every time having missed money of workers, sneaks and police officers, he asked Arbitration court to postpone bankruptcy introduction of the procedure. The pier the enterprise still breathes, the investor on the way! Give a chance! The court was kind to the deputy, but exactly until hungry workers rose.

Analysis of the reasons

In open sources there is no analysis of the reasons of crash of the ambitious project which implementation was conducted on the basis of operating enterprise, with active participation of top federal and regional officials. It is represented obvious that Alexander Bushin tried to ride out a trend on import substitution for a budget account, but did not cope. The only element which, as it is represented to me, he did not manage to complete is an obtaining the status of the only supplier. Such opportunity is provided by the Federal Law "About a Contract System in the Sphere of Purchases of Goods, Works, Services for Ensuring the State and Municipal Needs". This status would save Bushin from expenditure for marketing of new products as business would come down to simple exchange of goods for budget money. This guess is confirmed not only by my sources in Bushin's environment, but also the giving madness marketing of Gigiyena-Service. Here, for example: "Getting stuck in these huge Moscow traffic jams, I several times noticed young people who persistently offered drivers and passengers, sorry, condoms. Then I was surprised and is even shocked with it. But a bit later learned that these products from latex in hours-long traffic jams are used as compact toilets. Cheap but good. And it is disgusting when on the central streets of the capital you see dozens of such products with the liquid which spread from them. Perhaps, this circumstance (Moscow traffic jams) among others also prompted to the General director of OOO Gigiyena-service Alexander Bushin the idea of creation of the hi-tech innovative automated Mobi Piss line of production of disposable mochepriyemnik for men" is a fragment of advertizing article "Kondrovsky Arms for the Moscow Traffic Jams" which well transfers the general level of a public relations and marketing. The emphasis in public relations of Gigiyena-Service is placed on "anonymous" distribution of tangerines by Bushin, support of ensemble of the Russian dancing "Kondrovsky fidgets" and a patriotic urezonivaniye of the Polish competitors. In these articles Bushin more communicates with officials, but not buyers of "Mobi Piss" and Natali before which he was going to appear as the only supplier.

Extravagantly the reporting and business plans of Gigiyena-Service looks. For example, Bushin adjusted disagreements in balance for receiving the credit any indication of an exchange difference. The business plan contained such here simplifications: "Considering turbulence in the financial markets of the Russian Federation, the essential phenomena of devaluation of national currency, increase in the expected rate of inflation and also the long-term period of planning – 6 years, for prevention of distortion of the final results there are no inflationary processes, exchange differences and changes of rates of crediting".

If to speak about market prospect of the project, then professionals doubted its expediency at once. For example, the CEO of Rigla pharmacy chain Alexander Filippov initially doubts that Russia in general needs such new production: "There are a lot of these products retail networks, including pharmaceutical, see as STM, do not launch production directly and do orders and make within the program of own trademarks. As for raw materials, raw materials there, generally import at all, and production is localized here. Therefore, I think that colleagues who want to win 50% of the market need to try very strongly to present to the market quality products and at very low price".

Traditionally problem was a search of domestic components for new import-substituting production. "There was a situation with production of cellulose today unclear because all of us know that at us there is a lot of the wood in the country, cellulose at us is produced, and in decent volumes, shipped, generally is abroad exported, and here from abroad we already receive our native cellulose in the form we can put it in the automatic machine. The same situation and with a film which is made from petrogranules. Oil as you know, in the country it is a lot of, we have granules, and there are no equipment and enterprises which would be engaged in it, today. The government paid to it attention so we hope that by the end of this year at us already these 37% will turn at least into 80%" — Bushin's adviser Mikhail Lysko noted in an interview to Kommersant. It is quite obvious that to synchronize several projects which would allow to carry out real import substitution – business difficult. Therefore, upon, FRP allocated money for purchase of the foreign equipment which makes foreign raw materials products. From pluses – in the monotown the production feeding 500 people from minuses – almost all the rest worked.

Seriously the conflict with Gazprombank which a long time financed Gigiyena-Service under school qualities the business plans filled with spirit of import substitution, optimism and patriotism knocked down Bushin's position. The conflict took place after Bushin unilaterally decided to throw funds from LLC Gigiyena Service on financing of the new project "Gigiyena-Service Med" and ceased to pay Gazprombank. In reply to GPB charged-off 100 million rubles of Gigiyeny-Service and exsanguinated the company. Withdrawal of current assets caused failures of purchase of components and failures of deliveries to state employees. Soon LLC Gigiyeny-Service Honey was included in the register of unfair suppliers. There was a collapse which resulted in bankruptcy.

It is possible to get acquainted with Alexander Bushin's position in YouTube and on the website of Legislative assembly of the Kaluga region. It seems that Alexander Mikhaylovich inclines to the conspiracy version of fiasco: "Money for this enterprise was offered me. Money offered for that I did nothing. Because there everything is grabbed with other countries. I refused and just began to kill".

At the moment Bushin's enterprises release the minimum production volume. A part of employees got laid off. I believe that to liquidate the enterprise in the depressive monotown to hesitate. On the one hand – it is a shame, the project image, on the other hand - it is 500 unemployed. Therefore fight of the foreman of the shop of sanitary and hygienic products against the international corporations for 50% of the market will infinitely last long.

Digest of the best investigative journalism